There are two versions of this family book, the original was published in 1908 and a revision with additions was published by Mary Smouse Yohe, of Havertown PA, in 1969. Content from both will be presented here. 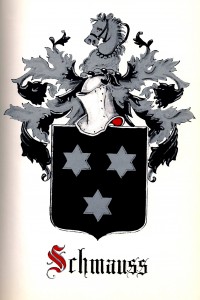 “According to J.B. Rietstas’s Armorial General, a rare authentic reference book, published in Holland in 1887, and Karl Smith,cartographer and designer, the Schmauss family Coat-of-Arms is described as follows:

The Shield has a black field with three six pointed Silver Stars upon it. There is no explanation why black was chosen or usded, but it is generally assumed that black indicates mourning and this is used where there was an association with the Crusades.

The Stars are known as “Mullets” and are derived from the Rowels of Spurs. These “Mullets” or Stars appear frequently in heraldry and originally there may have been some suggestion of a horseman and his spurs.

The crest is described as a Horse “Issuing”, which means in Heraldry as “Coming out of.” It is silver in color and has a black bridle.

The helmet has no special meaning. It is assumed that ancient warriors would wear helmets, if they needed a shield in battle. Royalty and Peers have special helmets which differ in metal and design according to rank. Most families have steel helmets as does ours.”

Introduction 1908
Mr. Emerson says, “No man is worth his room in the world who is no commanded by a legitimate object of thought.” Again he says, “The few superior persons in each community are so by their steadiness to reality and their neglect of appearances.”

The author who is “commanded by a legitimate object of thought'” has the first requisite necessary to make a book “worth its room in the world,” and if he writes a book animated by “its steadiness to reality and neglect of appearances,” it ought to have a place in the world.

Books like people have various ways of getting into their places in the world. This book comes and seeks its place by force of circumstances which could not well be resisted. The circumstances need not be enumerated. But the chief circumstance, or primary object was to give an historical and biographical sketch of the family in America.

It may seem selfish to mention the amount of labor that has been necessary int he accumulation of so much data, and this seems the proper place to express how much the author is indebted to George Smouse, Elmer S Burket and John M Smouse, members of the Committee on Data, and also the Rev. J.M. S. Isenberg, B.D. for the facts and in many instances the very language herein given. But in a multitude of instances the facts refused to appear in suitable and concise form, and so had to be fashioned and rewritten.

It would have been a comparatively easy task to have inventoried all the facts. But that would not have been a noteworthy labor. There has not been another such ransacking of libraries, archives and church records in recent years, and although much has been obtained and accomplished by this diligent research, the author had to sift and analyze traditions and discover facts in many instances, and feels assured that the truth has been arrived at.

In the list of descendants it has been impossible to have all the names given and all the dates exact, and in this respect we must ask indulgence.

The honored and respected record of our ancestors should stimulate each and all of us to make future name of the family still more honored and respected, and thereby transmit a legacy to our prosperity of which they may be proud, and by so doing inspire them to attain unto the highest niche in the temple of honor and fame, thus amply rewarding us for all our labor and toil.