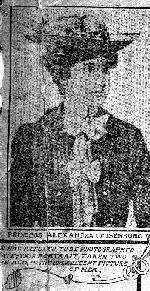 Princess Alexandra of Isenburg ” She has refused to be photographed . . . this portrait, taken two years ago, is the only recent picture of her.”

Berlin Nov 8…. Announcement that a warrant was recently issued for the arrest of Princess Alexandra of Isenberg makes it permissible to unveil this woman’s remarkable career. She comes of on e of the oldest and proudest families of the Higher German nobility, for the Eisenbergs can trace their descendants back to a valiant warrior of the tenth century, and they were loaded with riches, honors, and titles 800 years ago.

At the age of 20 Princess Alexandra married her kinsman Prince Adalberg of Eisenberg, who belonged to another branch of the clan, and it was thought that the young couple had every prospect of long-like happiness.

Prince Adalbert was immensely wealthy and the Princess brought a dowry of $5,000,000 into the marriage. They were both handsome and young, they possessed nine magnificent homes and estates and they had a brilliant social future before them.

Soon however things assumed a different aspect. Princess Alexandra grew cold toward her husband and fell in love with an officer nabbed Pagenhardt in a regiment stationed at Struttgart, where they lived. Lieutenant Pagenhardt was a man of plebeian birth, penniless and nor even good looking. Nevertheless he was able to fascinate the princess, who deserted her husband and throe her lot with his. Prince Adalbert filed an action for divorce, citing Lieutenant Pagenhardt as co-respondent and the divorce decree was pronounced just two years after he had led the Princess to the alter. One year later Princess Alexandra married Lt. Pagenhardt, who, through her influence was able to obtain the rank and title of Baron. At the settlement of her divorce she received back most of her dowry of $5,000,000 though she was not quite as wealthy as she was in her first marriage. But, she still had enough of the $5,000,000 to live comfortable for the rest of their days.

The Baron and the Princess began to live in great style shortly after their marriage. They maintained a palace in Struttgart–for they continued to live there, notwithstanding the presence in the town of the princess’ first husband–they had a country house in Bavaria, a shooting lodge in the Tyrol, a villa in the Riviera and a town residence in Berlin. At their various homes they kept several hundred horses and employed a regular army of several thousand domestics and servants of all kinds.

During one winter they gave a banquet to 100 guests on 50 evenings in succession, and each one of these sumptuous feasts, at which the rarest dishes and the choicest wines invariable served, cost a fortune. Princess Alexandra never wore an evening dress costing less than $500.00 and frequently appeared in theaters and public places of amusement with diamonds to the value of $250,000.00 attached to various parts of her person. They kept a yacht almost as big as an Atlantic liner, and never made a railway journey without their own special train, made up of the most luxurious sleeping, dining, and saloon cars. The Baron never smoked a cigar costing less and $1.00, nor did he offer guests a less costly blend than his own.

It would have been clear to any sane individual that even princely fortune would not last long at this rate of expenditure, but the Princess and the Baron had no real conception of the value of money until it was all gone.

Almost immediately after their expensive style of living was commenced it became apparent or evident to them they could not keep it up on he interest yielded by the princess fortune so without hesitation they began to draw freely on the capital of course with disastrous results. The Princess came into three substantial legacies, amounting to $2,500,000, but this amount, too, failed to save them from ruin. Counting capital and interest together the princess and the baron, her husband spent some $8,000,000. Within five years, and when they had exhausted all their money they tried to borrow from others.

The style in which they had lived enabled them to do this with facility for no one, not even the shrewdest of money lenders, had the least idea that they had come to the end of their resources. It was thought that some temporary financial difficulty had occurred, and fund for them were for the coming, in plenty at exorbitant rates of interest. This went on for about two years, until at last it began to be whispered about that the Princess and the Baron had lost their fortune. Immediately their was a panic among their creditors, who began to grow importunate in their demand for payment. At the first signs of trouble violent quarrels commenced between the Princess Alexandra and Baron Pagenhardt, her husband, each reproaching the other with being the cause of all their common mis-fortunes.

Before long they obtained a divorce on the plea of mutual disagreement and seven years after her second marriage, when she was just 30 years of age, the princess became for a second time a divorcee. That was eighteen years ago, for the princess is now 48 and during these last 18 year life has been one long struggle against impending ruin and utter disgrace. 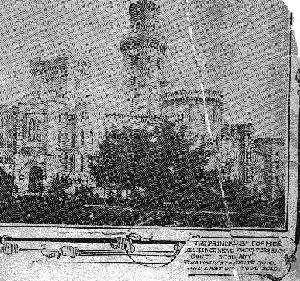 near Waechtersbach,  South Germany “This was her favorite home and last one to be sold.”

Princess Alexandra sold her possessions in Bavaria and Tyrol, also her residences in Berlin and the Riviera and embarked on various financial speculations with the proceeds. She understood nothing of finance, so that her speculations dragged her still more into debt. Finding speculation unprofitable Princess went on the turf, and sought to restore her fortunes by bold gambling on all the fashionable race courses in Europe. Betting, however proved to be as disastrous as financial speculations and more and more added to the princess already advanced debts and accounts. After these failures, Princess Alexandra lived from hand to mouth for number of years, borrowing money in small amounts from old acquaintances and contriving along with all kinds of make shifts.

Meanwhile neither interest nor principle and some of them resolved to take (receiving a legal step which the German law allows.) One afternoon as the princess was walking down one of the streets in Berlin she was seized by the public bailiff, who carried a warrant authorizing him to seize any portable property which she was carrying on her person, for the benefit of her creditors, Accordingly she was held upon in the street, while the bailiff and his assistants searched her pockets, and person, taking possession of her watch, several articles of jewelry, of her purse containing eight dollars and several smaller articles. Her highness attempted to resist arrest, with the result that there was a row in the street, ending in something like a free for all between the bailiff and the princess.

The affair caused such a scandal the princess’ relatives, having previously washed their hands of her, felt bound to interfere to prevent their noble name being mixed up in any more street brawls with bailiffs. They declined to settle any of the enormous debts contracted, but they promised to pay the Princess Alexandra an annual allowance of $2500.00 if she would leave Germany and live some where quietly out of the reach of further public scandals. The princess being thoroughly tired of her life and adventure, accepted the proposition, and spent the next then or eleven years of her life at English, French, and Belgian water places, spending the winters in Italy, all at the expense of the relatives who were subscribing her annual allowance. Eventually the respectable like proved too tedious for the gay princess, who broke out into her old ways two years ago.

Having managed in some way to obtain a substantial loan somewhere or other–it is not difficult for a princess to borrow money in Europe– she went back to gambling at the race courses in the most reckless style. Losing money this way she next tried financial speculations again, losing all she had risked, contracting lager debts in addition. Her next move was to Monte Carlo where losses continued.

By this time relatives, hearing she had broke lose in her old practices cut off her allowance, reducing her to destitution. At the beginning of this year, the Princess Alexandra appeared at Stuttgart in shabby attire and persuaded a member of the Isenberg family to lend her money to start a hotel on the banks of Lake Constance. The hotel was opened on April 15 and fact that the manageress was a princess was advertised extensively. The princess, swallowing pride, actually working hard in her new position, drawing up the menu everyday, engaged the waiters, received the visitors when they arrived and was polite to them, and walker around the restaurant at every meal to make the little bow, which is the custom in the German restaurants, to the clients.

Ill luck again followed her and the hotel was found to cost more than it produced. It continued for two more months more at which time its door closed and the princess disappeared from Germany.

On August 15 it was announced by the courts of Stuttgart that the debts of Princess Alexandra of Isenberg amounted to $15,000,000.00 and as for the creditors, they could ascertain no sizable property to compensate them for their heavy losses. It was alleged that one usurer had committed suicide when he discovered that he had lent money on bad security, and other sad stories of the distress caused by the princess failure to pay her dues were related. Subsequently, a warrant was issued authorizing the arrest of Princess Alexandra, on a charge of obtaining money by false pretenses and of contracting debts while knowing that she had no chance of repaying them.

Princess Alexandra, the descendant of the famous knight of the tenth century, is now reduced to keeping a lodging house at a continental watering place. She is endeavoring to earn a living by honest means, and hopes to be able to reform her ways. She does much of her housework herself and spares no effort to make the establishment a success. It is to be hoped that this enterprise will prove to be less disastrous than her previous efforts to make money.

Although his rank is no so high as that of the princess, there are striking points of resemblance to her story int he career of Baron Franz Josef von Lerchenfeld, who was sentenced in Vienna a few days ago to fifteen months imprisonment and loss of his title for contracting debts which he knew he could not pay. There is no doubt about the man pedigree. He comes from one of the proudest old Bavarian families; he is god son of Emperor Franz Josef, and his mother was a playmate of the murdered Empress Elizabeth. He inherited a goodly fortune, and lived for a time in the palace of the Archduke Ludwig Victor, trying to keep the pace set by the average Austrian Archduke–the swiftest in all Europe. After wasting all of his fortune and borrowing all that his aristocratic friends would lend and squeezing all he could from the money lenders, he reached the point where he was willing to fraternize with any one who could be touched for a loan of a few dollars.