hann Baptista Franz Erbprinz von Eisenberg yesterday kept himself very quiet at the St. James Hotel, only taking a short walk in the afternoon in the company of his major domo, in order to enjoy the fresh air and to review the processions of Baltimore beauties who passed up and down Charles and Lexington Streets.

In this connection it appears but proper to correct a statement concerning his age, which would make him a middle aged bachelor, the prince born in 1866, is the eldest son of Prince Karl von Eisenberg of Birstein, and Marie Louise of Austria (Archduchess) is only 26 year old and is First Lieutenant A La suite of the German Army. Which he entered after absolving his studies at the University of Straussburg. 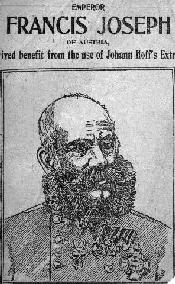 He belongs, however, like his uncle Franz Joseph of Austria Hungary, to a pretty old family whose name is first mentioned in the history of Germany in the 10th Century, when Gerlach von Eisenberg (966-1008) was one of the counts of the German Empire in what is now called the Rhine Province of Prussia. His castle, the Eisenberg, was situated near Coblenz, ruins of it still stand on a hill side in the borough or town by the same name. Out boys of the American Army after the World War, who occupied this Rhine valley then (1919) occupied or spent much time in the same castle their ancestors lived in centuries before.

Carmen Silva the Queen of Roumania, whose family is also related to the Eisenbergs was born and is now spending her last days in a castle new by. By intermarriage the Eisenberg’s became powerful vassals of the German Empire, and in he 13th and 15th centuries, the posers of large estates in Hessen, among them Berstein and Buedingen. During the 30 years war the tow sons of Count Wolfgang Ernst founded the two lines still existing as the Princely houses of Eisenberg Birstein and Eisenberg Buedingen. The former became Prince of the Empire in 1744. The Dominions of the family embrace estates quite extensive in the Prussian Province of Hessen-Darmstadt, with towns, boroughs, and villages, and numerous castles.

Prince Karl, the father of Prince Leopold, who succeed to the principality in 1866, is hereditary of the house of Lords of the Prussian Diet and member of the First Chamber of deputies of Darmstadt. He is a gentleman of Literary attainment and a great influence among the conservative party. Among his political writings the new era 1866 attracted considerable attention, through a warlike race, fighting most all of the time, for or against the Emperor, or in other words at this stage of history, among their own people.

The Eisenbergs for centuries have been recognized as protectors of science and art. Even a poet laureate under Emperor Ludwig IV (1314-1347). He was the grand son of Gerlach von Eisenberg, who in the 13th century after his return from the Crusades is said to have founded the beautiful cathedral of Limberg on the Lahu, and his daughter, Imagine, the wife of Adolf con Nasson, the German Emperor, with whom she was crowned at Achen in 1292, is the heroine of a charming romance still sung in the Father land (and admired).

It related how Imagine as a novice in a convent was nursing the Prince, he having been injured in battle, how both were soon married and lived a happy life at Adolfseck, his magnificent new castle hear the Rhine. When he went to war she would follow him to pray while the combat was raging until one night having laid all day in fervent adoration before the Alter at the Church in Rosentaht, she started out over the battle field near Wo(e)rms on the Rhine accompanied by her husbands faithful dog, soon discovered the Emperor among the slain. Soon after she was found dead over the Emperor’s grave.

Another Eisenberg became great Prince of the Church about the middle of the 13th Century as cardinal and Archbishop of Treves. He belonged to the militant church and was a greater warrior and statesman than Theologian. In the 16th Century Johann von Eisenberg was elector of Treves. In the 30 years war, members of the family are found as Generals both among the Protestants and Imperial armies. But after the war in 1648 the Eisenbergs were fighting among themselves and against others, almost up to the end of the century.

Quieter times and more tranquil spirit have since prevailed in their ranks. Prince Leopold like his father, whose noble image adorns the last edition of the almanac Degotha, looks like plain and peaceable democratic citizen