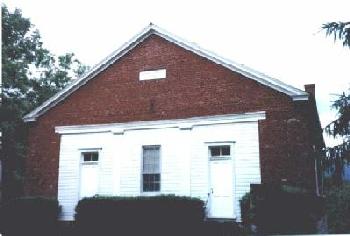 A crown upon this hill
This structure fitly rests,
Its jewels cut with skill;
A century attests.

A song of glad ascent,
Full surges in the deeps
Of pilgrims hither bent,
While memory tryst keeps.

Stepping back in time is easier than you may think. When you first open the doors of the historic Old Keller Reformed Church in Canoe Valley, Pennsylvania, you can almost hear the families of the past raising their voices in anticipation of the morning service. The sun shines through the windows casting long shadows across the floor. The past slips easily into the present and a time thought lost briefly returns.

The first time I was able to attend the yearly Homecoming, I didn’t really know what to expect. I had grown up hearing so much about the Isenbergs of long ago but hadn’t really attached much personal meaning to the stories. I had been to the places where they lived and the even more numerous places where they are buried. But, this was a rare opportunity for me to see and experience first hand a little bit of how they lived. I came away with a real sense of the pure and simple joys of the past…one that gave me a better understanding of the meaning they must have found and shared in their lives.

Standing on the highway above, you can just barely see the little church and it’s cemetery standing alone on its own grassy knoll in the distance. It is now partially hidden under the shadow of old spreading trees, some that have stood there since the time it was built. The surrounding hills and valleys are decorated with the green fields and pastures of a neighboring farm; cows graze nearby. As you move down the road you might easily miss the turn up the little lane to the church. Walking the grounds, enjoying the cool breezes under the shade of trees, you may also notice marks, in the freshly cut grass, of long ago hitching posts and the depressions made by the hooves of horses that once stood there.

The Keller Reformed Church traces it’s beginning back to Rev. John Deitrich Aurandt, a ministerial student from Lewisburg, who brought the Reformed faith to this area as he traveled, preaching the gospel on his circuit ride through Union, Huntingdon, Cumberland and what would become Blair Counties. In 1804, he purchased a farm near Yellow Springs and along with Rev. Frederick Haas, a Lutheran pastor, held regular worship services in Water Street. Then in 1818, the two congregations erected the Union Church at Shaffersville, west of Water Street. By 1845, during the time of Rev. S.H. Reid’s pastorate, the Reformed congregation had grown large enough to require a Church be built in each of the surrounding communities of Sinking Valley, Alexandria and Canoe Valley.

The land donated by John Keller lies in Blair County, near the border of Huntingdon County. Legend has it that the Church foundation is built on remants of the revolutionary site of Fort Lowry. The cornerstone was laid on August 11, 1846 and the building dedicated on January 22, 1847. It soon became a spiritual center for the lives of this rural community until 1926. At this time there were no longer enough members to sustain it and the congregation went their separate ways. But, it speaks volumes of the families that were once the heart of Keller Church, that after it was no longer in “use” the old church was never “abandoned” as was so often the case. An association was soon formed and trustees elected to preserve this aged spiritual home of our ancestors for the generations to come.

The structure is a rare and wonderful example of church architecture of the time. Built with bricks made on site and a planked wooden double entryway, one for men, the other women, it reveals its German heritage. If you look carefully when you enter, you can detect the marks of wear on the wide wooden floor planks made by the boots and shoes of those who passed before. The two front doors frame the alter as it stands in front of an alcove naturally illuminated by narrow side windows and papered with the same blue and white star-spangled design that once covered the ceiling. All of this the backdrop for the hand made pulpit. A small platform behind a hand carved railing to the right sets the choir and organist apart. The only source of light in the sanctuary now are from the white shuttered windows, each with exactly twenty-four single panes of glass. The cool shaded basement that was once used as a shelter from danger, is now used to enjoy refreshing drinks and covered dishes, in an atmosphere of warm and friendly fellowship.

The Church is kept closed all year, except for the first Sunday each August, when the doors are then opened wide to show off its bright walls, many rows of straight back pews, and two imposing black pot-bellied stoves that must have taken the chill off many a cold and crisp winter morning. I am told that there were many more treasures to behold inside before vandals made off with them in 1988. Gone is the horsehair settee, coal-oil lamps mounted on the sidewalls, the kerosene-lamp chandeliers that lighted the altar area, and a marble topped table that stood proudly behind the altar railing, all heirlooms of this “family.” The most precious keepsake lost was the pulpit Bible, inscribed and presented to it’s pastor on it’s day of dedication in January 1847. There is still hope among the Trustees that someday it will be returned to its rightful place.

Yet, the loss of these mementos has not diminished the spirit that still rises upon the return of the trustees and the many descendants of the founders and their families. They return with the communion set and common cup, the baptismal font, all gifts of Samuel Keller, a founding member of the church. The pump organ is played and the congregation again sing the old familiar hymns and worship God, as the little ones squirm in their seats, just as I’m sure the children did 150 years ago. There is a sense of shared heritage and feelings of joy and peace that comes from sharing a common thread passed down through the centuries. Some things never change . . . just as it should be.

One very treasured feature of the church that still remains is the “library”. In the left front corner of the sanctuary is the wood and glass bookcase that contains numbered spaces for exactly 356 books. When in use, it held a variety church related books in addition to many Bibles and hymnals. In the center is a narrow room just big enough for one or two people. Here a librarian and an assistant could enter to keep track of and dispense books quite easily, while the parishioners viewed the available titles from the other side. In days past, books were very expensive and out of reach for many families. As worship was an integral part of their daily lives the church was a logical place for seeing that those who could not afford their own books had easy access to them. I also suspect that for those who had to travel any distance they may not have wanted to carry their own books back and forth in foul weather and kept them in their own numbered space in the church “library.”

The gravestones in the nearby cemetery bear many of the names of early settlers to this area who became the families of this church. Many of these names remain in the surrounding communities today; Keller, Harnish, Patterson, Aurandt, Tussey, Hyle, Boyd. One particular stone marks the grave of “Long John” Keller who stood 6’5″ or more. He was a Revolutionary War Soldier, born a week after George Washington and lived “99 years and six days.” It is on his land that Keller Reformed Church stands, a legacy to all of us who feel a part of this historic place.

My family’s association with the church dates back to it’s early years. Jacob Miller Isenberg and Susannah Wolford were married in 1856 by the Reverend Frederick A. Rupley at Susannah’s home in Barree and planned to live there and raise their family. I can imagine how they might have met at the Keller Church, their families brought together there. My great great grandparents so greatly admired and respected the Rev. Rupley, minister of Keller Reformed Church from 1852-1856, that they named their first son, Augustus Rupley, after him. Many years later, my father, Francis Rupley Isenberg, was named for his grandfather and was always called Rupley by the family.

Having grown up near there I have traced the journey from Barree to Canoe Valley and have an appreciation of what they must have felt travelling back then, on Sunday by carriage, with their growing family. I felt a sense of renewal in taking that one Sunday in August to step back in time and reflect on how different we live our lives today. I long for more opportunities to reflect, share, and rejoice in our being together. I think we need to be reminded of the importance of these past connections before, in our rush to experience life today, we forget to reason why.

Although none of my direct ancestors are buried at Keller Church, there are many Isenbergs there. I feel very connected by that link made long ago by J.M. Isenberg and his family. I am proud and grateful to be a part of its legacy, and in turn pass that richness on to my children.

I would like to thank the trustees of Keller Reformed Church for their permission to use the materials in this presentation. Bob Harnish, President and Nancy Taylor, Treasurer were most helpful in providing their assistance and support. I look forward to seeing them in the near future and share more stories and history of our common heritage.

The following are the names of the ministers and the dates
they served in the Keller Reformed Church: